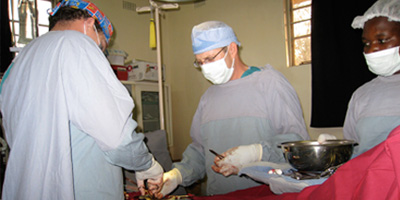 It was 10:00 pm New Year’s Eve 2011-12 and Dr. Stephens only wanted to be in bed. He had no desire to see the New Year come in. He had already done several surgeries this night and hoped that was the end. It was not to be. In rolled an ambulance from Mt. Darwin Hospital, a hospital 30 miles away. Their doctor was not to be found. He may have been at a New Year’s eve party. The ambulance brought two ladies. One had just given birth to a child but was still bleeding. The other was trying to give birth but was obstructed but had bled so much already that she was in shock with a very low blood pressure, so low that when she sat up she fainted. How do you operate on someone like this? How can the baby be alive? The other lady was bleeding so heavily that she too was in shock and to operate would kill her, to not operate would be to allow her to die.  So Dr. Stephens laid down on a bed and told the nurse to take a unit of his blood and give it to the patient. With this transfusion of blood the patient became stable, her blood pressure improved and with medication her bleeding stopped.

The first lady was operated on to stop her bleeding and to allow the baby to be born. We had very little hope for mother or child.  We gave the mother that last unit of blood in the hospital—it just happened to match her blood type.  It was 2:00 in the morning. The nearest blood bank is 140 miles away. By the mercy of God, a live baby was born by Caesarian section with no sign that he had almost died. The mother was very weak and unconscious but was awake enough in the morning to feed her baby and went home less than a week later with a healthy little gift from God—two gifts actually – her life and that of her child.

The story is not over. The next morning, Dr. Stephens decides to make rounds on his patients early even though it is a holiday and New Years Day. At 7:30 in the morning he finds the lady he had given blood to, bleeding again and back in shock. He calls up his father and his wife and two more units of Stephens blood were given to her.  An emergency hysterectomy was performed and this lady too, went home a week later, doing well—another gift from God.  Three lives saved that New Year’s Day—an example of God’s promise that He is there to lend a helping hand when human efforts fail—but he has chosen to use you and me to be instruments in doing His work.